European partners attended the Irish meeting from Monday 12th to Wednesday 14th May 2014. The theme of this meeting was ‘Active Citizenship through Peer-Mentoring’.  Partners focused on different aspects of citizenship through a variety of peer-mentoring activities.  There was a particular focus on political engagement and the importance of exercising your right to vote on a local, national and European level.  This coincided with the local and European elections which were taking place in Ireland at the time. 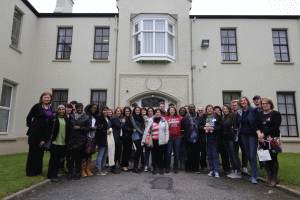 An official welcome and opening address took place at the Portlaoise Adult Education Centre attended by learners, tutors, the Director of Further Education and Training and Chief Executive Officer of the Laois & Offaly Education and Training Board.  This was followed by a visit to Aras an Chontae, County Hall, Portlaoise where participants were introduced to local government and attended a local council meeting in council chambers. 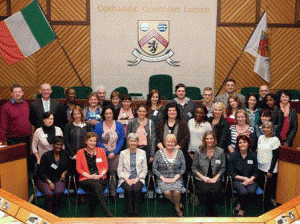 Pictured are adult learners, tutors, representatives from the Laois & Offaly Training Board and EU project partners at the opening address in Ireland.

During the Irish meeting adult learners participated in workshops focusing on digital media and numeracy through peer-mentoring.  Partners were also introduced to National Government in Ireland and experienced firsthand the workings of Irish politics.  EU visitors participated in a tour of Dáil Eireann and Seanad Eireann, Leinster House, Dublin and completed a questionnaire on the Irish political system.  The group met with newly appointed Minister for Children and Youth Affairs and witnessed his first televised question time as minister in the Dáil.

Project meetings involved discussions on the Final Report, project dissemination strategies, project outcomes and achievements.  There was also opportunity for reflection and evaluation on the whole project with positive input from adult learners and tutors.  EU visitors also had cultural visits to local and surrounding areas of historical interest.

Attached is a project brochure disseminated during the sixth and final meeting in Ireland:

Attached is the questionnaire completed by adult learners, tutors and European partners during the visit to Dáil Eireann, Dublin:

Attached is a powerpoint presentation delivered during the opening address in Ireland which gives an overview of the HELP project and insight into Peer-Mentoring practice implemented in Ireland:

Overview of HELP project and peer mentoring practice in Ireland

HELP project partners in Ireland were delighted to receive this positive report from UK partner Maureen Brewster after the sixth and final meeting in Ireland: